You may have just bought an awesome guitar amp that sounds great, but upon closer inspection you find that it doesn’t have quite the rough tone that makes metal and rock songs unique. Luckily, all is not lost- if you’ve got a tube amp, then all you’ll need is a compatible overdrive pedal to produce that effect.

The oft-overlooked overdrive has led the rock genre to new heights, thanks to its ability to control effects without blasting the audiences’ eardrums to kingdom come. For those who want to get the same effect, you’ll need a suitable overdrive pedal to go along with your tube amp.

Gimmicky product name aside, the Fulltone OCD Drive Pedal is an excellent overdrive pedal that allows you to play your style without eliminating clarity and guitar definition.

The sticker-shock price may surprise you, but it’s one of the best overdrive pedals available in the market today. It’s for the serious musician who wants the best possible tube amp distortion and feel!

A quick look at the front of the pedal reveals a simple layout and a design that caters to both tone and volume options. There’s an HP to LP switch that allows the user to adjust peaks according to preference and for achieving unique tones.

Fulltone’s cases are very durable and can take a beating. If there’s one notable difference as compared to modern overdrives, then it could be that the OCD Drive Pedal features a button switch instead of the newer slider-types.

OCD trumps all other overdrive pedals in that it doesn’t come to a distortion early on, and this means that you can play on until the compression begins. This type of effect comes in handy for when you’re playing hard rock and blues-type music. There’s also a Low Peak Hi Peak setting that doubles as a booster for producing interesting sound results when paired with either overdrive or clean channels.

With the Low Peak you can expect a decent level of clean boosts in low and crunchy sounds when the drive is turned up. One neat trick is to suddenly switch up to High Peak for distortions worthy of Marshall’s very own.

The TS9 Tube Screamer is as close as you can get to the original version. It’s so close that almost all the hardware, from the housing to the minute components are made to resemble the former.

The green seasick paint will surely bring up memories of the legendary Tube Screamer of old. Go ahead, take the TS9 Classic for a ride- plug it in, stomp down like there’s no tomorrow and play like you’ve never played before. The sound coming from the re-issued version plays distortions as faithfully as the original overdrive pedal!

The newer Tube Screamer has a noteworth pedigree- the Ibanez Tube Screamer was a popular pedal that was used heavily during the 70s. Bring this equipment anywhere and you’ll be sure to have a conversation about the original model.

The Tube Screamer works particularly well when you’re playing the blues via the beautiful mid-tone boosts coming out your amp. Ibanez Tube Screamers have been used by guitarists such as Kirk Hammett, Keith Urban, Carlos Santana, Steve Vai and Stevie Ray Vaughan, among others.

You haven’t played overdrive pedals old-school until you’ve tried an Ibanez TS9 Classic. The classic version was originally made with tube amps in mind, and today we have a modern version that works really, really well and produces great distortions at any level.

A quick look at the front reveals a no-nonsense layout featuring a foot switch and tone & drive knobs at the top. The case is as you’d expect, durable and comes with the famous bright green color. As of today the Ibanez TS9 Tube Screamer holds its own well against the onslaught of newer overdrive pedals in the market.

In the sound department the TS9 Classic won’t offer much playroom or give a truly rich gain. Instead, you can expect the Tube Screamer to do what it does best, and that’s providing a dynamic tone suitable for blues and hard rock music.

Last but not the least, we have an overdrive pedal that’s been popular in use since the early 80s. The Boss SD-1 Overdrive Pedal has become a somewhat household name because it offers asymmetrical clipping, varied overdrive tones and a great value overall. For the uninitiated, having asymmetrical clipping means you get a natural overdriven tone of a maxed-out tube amp that so many people fall in love with.

Many Boss-branded pedals have achieved cult status and a number of faithful followers over the years. Large-style pedal boards most likely have the Boss logo. If you want a truly reliable company who has a track record of producing excellent overdrive pedals, then you can’t go wrong with the Boss SD-1 Super Overdrive.

You get a foot switch and 3 knobs sitting on top of a bullet-proof case. At first glance the Boss Super Overdrive looks like any other overdrive pedal, but it shows its mettle when you put it to the test. Go ahead, try it out and stomp the pedal to kingdom come, but it will come out ready and willing to be played another day.

The dial is versatile and you can switch from smooth to grit with just a twist. You also get precise control over just how much or how little overdrive you get for the amp by changing the pick attack. It works almost the same as an overdriven tube amp!

The Boss Super Overdrive delivers when it comes to the sound department. It doubles as a workable amp booster with good tone range and overall sound quality. It’s not as versatile as the other offerings in this list, but that compromise translates well in terms of cost. Use it as a main pedal or a backup pedal to the one you already have. At the end of the day you get a sturdy pedal that can take a licking and keep on ticking!

What Does An Overdrive Pedal Do?

It’s hard to imagine a small, pocket-booked size equipment having such an important role on how rock and metal music are played. Ask around and you’ll probably get many different answers regarding overdrive pedals and what they do. For some, it’s the same as with fuzz and distortion pedals, while others give lengthy explanations as to why overdrive pedals stand above all else.

Overdrive pedals may be employed to do 2 things- first, they can be tuned for putting a tube amp into “overdrive” mode (hence the name) and produce a distorted, stressed tone; second, they can be tuned to produce a slightly milder distortion that goes well with cleaner tube amps. The best overdrive pedals can be called upon to do both things if needed. You can simply crank the settings to max and get the distortion you need in any situation.

One notable difference between overdrive pedals and distortion pedals is that overdrives don’t necessarily change the tone as compared to distortion pedals. Overdrives work with amps to produce a distorted sound coming from the amp and your guitar’s tone, and for this reason most guitarists use them only with tube amps.

Getting an overdrive pedal for a solid state amp won’t produce quality distortion as compared to pairing it up with a tube amp. If you already have a solid state you can simply add a distortion pedal to do the trick.

Most guitarists who play heavy rock and metal use an overdrive pedal along with distortion pedals attached to the chain for maximizing gains from the distortions. Others use an overdrive pedal for a quality midrange boost in the midrange and treble areas in a solo. The effect is similar to a guitar rising above all the other musical instruments for an undisputed solo via a hefty volume boost.

You’ll want a bright overdrive pedal that raises your guitar’s voice above the mix or one that plays well with other musical instruments if you want to blend in the mix. This will be a matter of personal preference and knowing which role you’ll be playing if you’re in a band. The bottom line is that an overdrive pedal gives you a better, more enhanced sound version than what your guitar and amp is already cranking out, with some useful sound distortion options thrown in the mix.

By now you’ll mostly have an idea of what role your overdrive pedal will play and how you want the distortions to sound like. The 3 overdrive pedals for playing with a tube amp we’ve covered are all excellent and provide a range of performance that’s sure to suit what you’re looking for.

But in terms of durability, quality and reliability, we do recommend the Fulltone model. So go get it and let the good times roll! 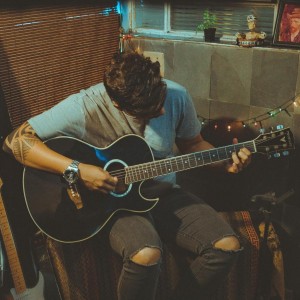 The Best Cover Ever is a participant in the Amazon Services LLC Associates Program, an affiliate advertising program designed to provide a means for sites to earn advertising fees by advertising and linking to amazon.com. Amazon, the Amazon logo, AmazonSupply, and the AmazonSupply logo are trademarks of Amazon.com, Inc. or its affiliates.